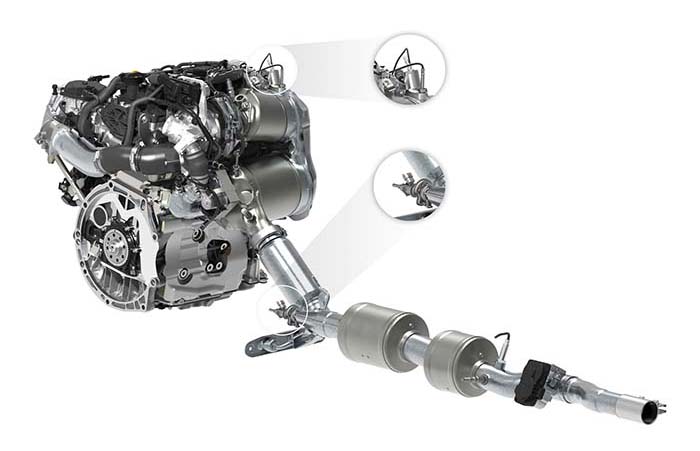 Clean and smooth-running – the 2.0 TDI, Volkswagen’s most important diesel engine is now in new top form. Thanks to sophisticated twin dosing technology in the exhaust gas system, it undercuts the Euro 6d emission standard limits while also running quietly and smoothly.

“The two-litre TDI engine remains one of our most important engines,” says Dr Frank Welsch, Member of the Board of Management responsible for Technical Development at Volkswagen. “It can be found in most of the brand’s models and in many of the Group’s models. For this reason, we spare no effort in consistently updating our successful diesel engine. In the version for the Euro 6d emission standard, it is now ready for the coming years.”

From EA 288 to EA 288 evo. The four-cylinder TDI engine with the internal designation EA 288 made its debut in 2012. Six years later, it took an enormous development step forwards, and was therefore given the suffix “evo”. Practically speaking, this meant reduced consumption, lower emissions, quieter acoustics, more spontaneous response and significantly more output and torque. The engine was also prepared for integration into a mild hybrid system.

New technology status for the Golf 8. In summer 2019, the two-litre diesel engine’s technology was further updated for the new Golf. For this, a variant with lower output replaced the previous 1.6 TDI. The specifications stipulated that the engine had to comply with Euro 6 AP emission standard while at the same time also running more smoothly. Volkswagen opted for a dual strategy: detailed measures optimise the combustion process and reduced raw emissions, whiletwin dosing technology in the exhaust gas system converts the majority of nitrogen oxides into harmless substances.

The performance of the radiator for the low-pressure exhaust gas recirculation system has been increased by 25 percent – thus reducing the formation of nitrogen oxides in the combustion chamber in high-load phases when drivers put their foot down. The injectors, which inject the fuel into the combustion chambers, operate with constantly high precision because a sensor monitors needle closing. The injectors can deliver up to nine injections per combustion cycle, whereby some injected quantities are smaller than a pinhead. The maximum injection pressure is up to 2,200 bar – almost as much as the weight of two standard Golf cars on one square centimetre. Foam insulation under the engine cover panel and a new silencer improve acoustics. As previously, the 2.0 TDI in the output stages from 110 kW (150 PS)0102 features two balance shafts to eliminate unwanted vibrations.

Two SCR catalytic converters for clean exhaust gas. Volkswagen developed twin dosing technology for exhaust gas treatment. Here, two SCR catalytic converters work together to split nitrogen oxides into water and nitrogen using AdBlue urea solution. Thanks to twin dosing, the emissions of both output variants of the new Golf 2.0 TDI0102, for example, are well below the limits of the Euro 6d ISC-FCM AP emission standard, which now permits only 80 milligrams of NOx per kilometre. Volkswagen set itself this low value as its target in the real driving emissions (RDE) test – this is equivalent to a 50 percent reduction in nitrogen oxides compared with the predecessor standard Euro 6d-temp.

The first SCR catalytic converter is installed directly downstream of the engine. This has a volume of 3.4 litres and simultaneously acts as a particulate filter. Its task is to convert more than 90 percent of the nitrogen oxides when the exhaust gas temperature is between 220 and 350 degrees Celsius and the vehicle is being driven normally. Thanks to its close proximity to the engine, it already lights off shortly after a cold start. The second SCR catalytic converter is installed in the vehicle floor. It features a two-part design and, depending on the vehicle concept, has a volume of 2.5 to 3.0 litres. The catalytic converter installed further away from the engine performs the main share of nitrogen oxide conversion specifically at high loads and correspondingly high exhaust gas temperatures. The exhaust gas, which can have a temperature of over 500 degrees Celsius when leaving the engine, has cooled down to approximately 350 degrees Celsius when it reaches this component – and this once again permits high conversion rates.

Widespread use at Volkswagen. The 2.0 TDI with clean twin dosing technology already powers many of the brand’s models, including in the Golf, Tiguan, Passat and Arteon model series. It is also widely used at other Group brands, with both transverse and longitudinal installation. Volkswagen is continuing to work intensively on further development of its successful diesel engine: one goal is operation in combination with a 48-volt mild hybrid system.