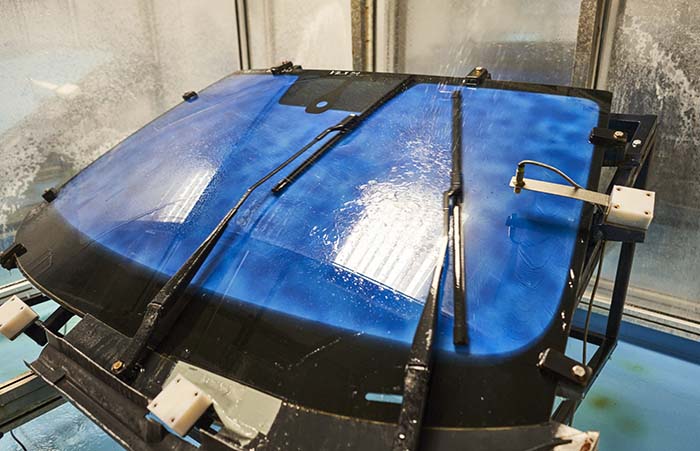 We take them for granted and usually forget how important they are. But have you ever wondered where windscreen wipers came from? Do they all use the same kind of motor? Why do some washer nozzles emit a diffused spray and others a direct jet? And how are they tested?

The wiper blades are tested over five hundred thousand cycles, but it’s a good idea to replace your blades much sooner, every six months.

The movement of windscreen wipers across the front or rear windscreen is made possible by a hidden linkage mechanism driven by a direct-current electric motor. “In smaller cars like the FABIA or SCALA we use a simple wiper motor for the windscreen. We call this kind of motor rotary, as the motor’s crank attached to a shaft rotates around its own axis. The motor does not have a control unit. The operating logic – i.e. when to activate the wiping motion and at what speed – is controlled by the car’s control unit. Naturally, the advantage of this system is its simplicity, while the down side is the limited functionality compared to reversible motors,” explains Pavel Švejdar, an expert from the Wipers and Washers department.

We therefore find reversible motors in higher-end models. They operate by means of controlled synchronous rotation of the shaft in line with the currently required output, swing and speed. As a result, this design is quieter and smoother and offers a wider range of functions, such as a lower park position allowing the wipers to be concealed beneath the edge of the bonnet when they aren’t in use. But the rotary version also offers convenient functions like the service position (you can find out here how to put the wipers in that position), slower wiping when stopped at a junction, or rain-sensor control (you can find out more about sensors here).

As the first models didn’t have a windscreen, there was nothing to wipe. It was only the last LAURIN & KLEMENT and first ŠKODA model – the L&K-Škoda 110 that was made from 1925 to 1929 – that had wipers, but only certain versions of the model. Since then, though, all the Czech carmakers’ cars have had wipers and later also washer units.

Fine-tuning in a wind tunnel

“The motor itself is connected to a kinetic mechanism via which the rotary movement is transmitted to the wipers. Development places great emphasis on the functionality and robustness of the system as a whole at low and high temperatures and at high speeds. We also pay close attention to the noise generated by the system. The system is designed to function flawlessly at temperatures from minus thirty to plus seventy degrees,” says Švejdar, adding that the wiper blades are tested over five hundred thousand cycles. Needless to say, it’s a good idea to replace your blades much sooner, with experts recommending that new blades should be fitted every six months.

When work starts on the development of a new car model, the amount of available space, the surrounding parts and the design of the car itself are factored into the design of the wiper system. The wipers supplier then adapts the basic design to its technologies. Testing is done by both the carmaker and the wipers supplier. The process as a whole takes roughly three years.

The wipers’ behaviour is fine-tuned down to the smallest detail in a wind tunnel. The propulsion system, the curve of the frame, the pressure exerted and the shape of the flexor have to be perfectly calibrated so that airflow does not lift the blade off the glass in places. Considerable attention is also paid to the ideal interaction of wipers and sprays, in conditions ranging from stationary to a car’s top speed. This should make it obvious that original wipers are very different from generic products that are usually intended for a wide range of models from various manufacturers. By contrast, original parts are tailor-made for a specific model.

Do your wipers jump?

In higher-end models with reversible wiper motors ŠKODA uses two park positions for the windscreen wipers: basic and extra. Maybe you’ve already noticed that from time to time when you switch off the engine or set off, the wipers seem to jump - even though it’s not raining and you didn’t touch the wiper stalk on the steering wheel. This is a protective function that prevents deformation of the rubber blade that might result from remaining in the same park position for a long time when the wipers are idle. The alternation of the two park positions is controlled by an internal algorithm defined in the wiper motor control unit’s software.

A wider area, or more stability at high speed?

Great attention is also paid to windscreen washer sprays during development. The key issue is their location, which must allow the washer fluid to cover the largest possible active (i.e. wiped by the wipers) surface of glass as evenly as possible in all conditions, at all speeds and with all types of fluid. Another objective is to make sure the washer sprays are not distracting: so the jet of fluid should be as even as possible and there should be no excess noise. In addition, there should be no moving fluid when wiping is deactivated.