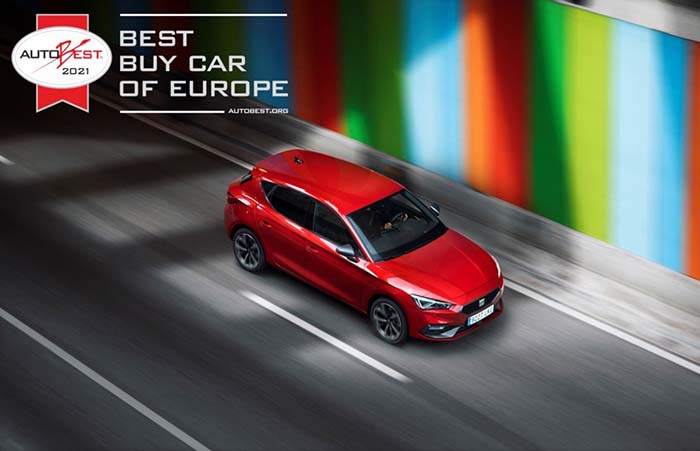 The AUTOBEST jury, made up of a panel of 31 respected automotive journalists from across Europe, voted Leon’s blend of driving dynamics, availability of powertrains including plug-in hybrid (e-HYBRID), and advanced connectivity, as the best to enter the market this year.

The advances to the new Leon in terms of safety, including a new centre airbag, resulted in a maximum five star rating from Euro NCAP under its new, more rigorous testing standards.

This is the second time in SEAT’s 70-year history that the company has taken the top honour, following Ateca’s win in 2017. This continued success highlights the company’s dedication to developing vehicles that go beyond the ordinary and offer something truly exceptional in the market.

“We are proud that our new SEAT Leon was elected “AUTOBEST 2021”, the best possible recognition for the team that was involved in the launch of the best Leon ever. A car designed, developed and produced in Barcelona, this award gives us renewed strength to look confidently into the future. The SEAT Leon has proven generation after generation that it’s an important pillar of the segment, and the award from the AUTOBEST judges reinforces the significance the Leon has in the market,” said Wayne Griffiths, President of SEAT and CUPRA. “It has brought the segment to a whole new level, mixing impressive design with technological advances to create a vehicle that provides everything customers need.”

The SEAT Leon has a strong track record since its introduction in 1998, selling 2.3 million vehicles worldwide and each generation being more popular than the last.

The Leon’s success was built on a £1 billion investment to help raise its standards of connectivity, efficiency and safety, but also to prepare the production facility for building the new model, available as both purely combustion engine and plug-in hybrid variant (e-HYBRID).

The AUTOBEST Award is among the most prestigious in Europe and has run consecutively since its inception in 2001.