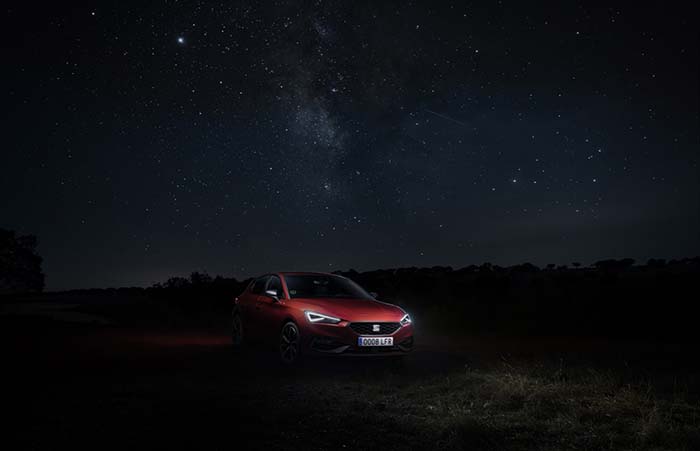 Milton Keynes, 10 December 2020 – SEAT engineers worked for approximately 2,500 hours on the lighting design on the new Leon and performed tests for over 800 hours in some of the darkest corners of the world.

The Dark Sky Algueva Reserve in Portugal, one of the darkest places in Europe and more often used by astronomers to observe nebulae and constellations, was one of the main testing grounds for the latest LED lighting technology featured in the new Leon.

“Here we have once again verified that the lighting we have designed for the fourth generation adapts perfectly to the road thanks to the range and width of the headlight beams and the contrast and definition of the rear lights” explains Carlos Elvira, head of Lighting and Signalling Development at SEAT.

Full LED technology has opened up new possibilities for engineers, both in terms of design as well as safety and comfort. “It enables us to have much more light on a much smaller surface area and thus to work with it much more efficiently” says Magnolia Paredes, head of Electronic Lighting Development at SEAT.

The team of engineers worked for approximately 2,500 hours on the design of the fourth generation SEAT Leon light assemblies.

This was followed by a further 800 hours of testing in darkness, either in the optical tunnel, which recreates night-time driving conditions, or on roads in the darkest corners of the world. “For us, testing in extreme climates is essential; in hot areas to test the operation of the electronics and in the cold to confirm the distribution of light on accumulations of ice” says Carlos.

In addition to its power and greater flexibility in where, how and when to direct the light beam, LED light stands-out for being much whiter than previous lighting technologies, with a colour temperature of 5,000 Kelvin. “This makes it possible to better identify the shape and colour of objects you encounter on the road at night, even in areas as dark as Alqueva, and this enables you to anticipate any circumstances that may arise” says Magnolia.

One of the keys to improving safety at the wheel is the quick reaction of LED lighting technology. An LED diode responds 150 milliseconds faster than an incandescent bulb. At 75 mph, this means the driver behind will see your brake light illuminate five metres earlier.

The wraparound arc of the interior ambient lighting is one of the greatest innovations that LED technology represents. “It was a great challenge for our programmers to obtain the maximum functional result” says Carlos. Not only is the ambient lighting colour customisable but it also fulfils an important safety function, alerting drivers to an improperly closed door or another car approaching from behind as you prepare to exit.

Additional safety features will be added by the end of the year. “The light intensity will increase as you accelerate to make you more speed conscious and if you are travelling with children and activate the safety locks on the rear doors they will light up in red if they try to open them” says Carlos.